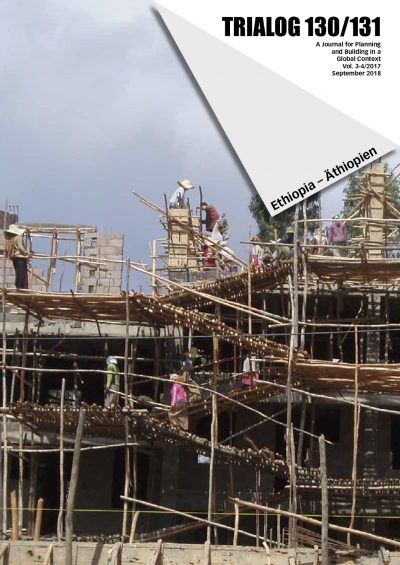 Ethiopia is undergoing rapid development: the national government wants to move the nation’s economy from one dominated by subsistence to one of industrial development with a middle-income perspective. The state is promoting large-scale, export-oriented farming and industries, often focus-sing on foreign investment, but is also supporting small and middle-sized enterprises. Late Prime Minister Meles Zenawi was committed to rapid modernisation and, with the concept of the “developmental state”, claimed for state institutions a leading role in the economy of the country. Current national strategies focus on programmes for poverty reduction, health, education, and access to basic infrastructure.

In this issue of TRIALOG, we aim at showing present and past developments in Ethiopia. We look at potentials and challenges for a transformation in the interest of all, including those living under precarious conditions. Even though one issue of TRIALOG can in no way suffice to cover all the diverse aspects, we tried to address issues we think relevant for an understanding of the current Ethiopian situation.

The present development of Addis Ababa seems, roughly speaking, to be driven by five dynamics: 1- the government-initiated Integrated Hous-ing Development Programme; 2- global capital investments in high-rise buildings with offices, hotels, malls and luxury housing in the city centre; 3- densification of traditional Kebele housing areas and the growth of informal settlements to a large extent driven by rural migrants and refugees who earn a subsistence living from small-scale production, trade and recycling of discarded materials; 4- large-scale state infrastructure projects like roads and public transport systems, often implemented by Chinese firms and financed with Chinese credit; and 5- international and local industrialisation investments in, for example, the textile industry.

The complex scenario in the country is expanded by the challenge of har-monising more than 80 ethnic groups, each with their own culture and way of life. This raises the question of what kind of “modernity” and/or “develop-ment” is wanted and/or needed in different parts of the country. How can the government, in cooperation with local people, find the appropriate ways to raise living standards in the whole of the country? And how can urban planners contribute to inclusive development?

In the first article, Hans Harms discusses the complex process of feudal state formation in Ethiopia as advanced in the second half of the 19th century in contrast to European colonialism, which justifies the often mentioned exceptional position of the country and is also mirrored in the present state-led model of economic development. He raises the question whether Ethiopia will succeed in the future to forge a national vision of self-deter-mined, sustainable, and inclusive development. Laura von Puttkamer and Hans Harms look at the planning history of Addis Ababa, which, with its overlapping planning legacies of the various government systems and the results of the unplanned developments, has formed the city’s ground plan. All that is now quickly being transformed by high-rise towers and traffic systems, but what is being retained is the culture of traditional associations and neighbourhood networks that play an important role in the everyday life and the development of local neighbourhoods. Sascha Delz analyses the Integrated Housing Development Programme in Addis Ababa, which, realised by the city administration with support of the German development cooperation, provided around 80,000 housing units between 2004 and 2010. He criticises two principles: the exclusive implementation of private ownership, which promotes social and spatial segregation, and the standardised housing blocks, which only in limited ways consider the traditional ways of life of the inhabitants. Monika Wiebusch explains how the decision for an exclusively private condominium ownership model came up, and looks at the challenges that arose with this new type of accommodation.

The reasonable attempt to form an Integrated Regional Development Plan for Addis Ababa and its surrounding towns in the Oromia Regional State, starting in 2012, resulted in a political failure by 2015. Melaku Tanku traces the resistance against the planning process – with all its cultural, political and institutional dimensions – and tries to identify wrong decisions and commu-nication errors that should be avoided in the future. South Africa and Ethiopia were the first Sub-Saharan countries to develop housing policies in the last decades to address the needs of people living under precarious conditions. Beate Lohnert critically analyses the different approaches of post-Apartheid South Africa and Ethiopia, problematising the “adequacy” criteria which, respectively, are interpreted very differently.

In 1994, for the first time the Ethiopian constitution defined regional states and thus required the establishment of new regional capitals. Leake Tesfamariam and Monika Wiebusch present the development process of Semera, the new capital of the Afar State, an artificial urban centre from the drawing board. Nadine Appelhans analyses the everyday urbanisation practices in four different local neighbourhoods in the middle-sized city of Bahir Dar, and recommends to not interpret them as running counter to state plans but, instead, to include them in the urban development strategies and to use their strengths: incremental construction patterns, diversity, temporary residence models, and the local production of knowledge. Elke Beyer and Anke Hagemann investigate some large textile-industry locations estab-lished in state-provided industrial parks in Addis Ababa and other cities. They analyse the integration of global production chains into the urban spatial context, asking which potentials, urban spatial effects, and conflicts result from the ambitious Ethiopian industrialisation programme.

Johannes Schoeneberger presents a programme for soil and water conservation in areas with subsistence agriculture in the densely settled highlands that brings, with relatively simple methods, good results and high local acceptance. In the last article, Ingrid Hartmann analyses the leasing of large agricultural areas for export production and procuring foreign exchange. She questions whether these strongly promoted foreign investments contribute to the improvement of the living conditions and food security of the country.

In 2018, after years of social and ethnic struggles, the new Prime Minister Abiy Ahmed, the first Oromo in this position, has dared a new political approach: he concluded a peace treaty with Eritrea, released political prisoners, and seems to have re-established freedom of press and speech. The future will show how Ethiopia – with a continually high population growth and severe ecological problems in urban and rural areas – will handle the challenges it faces; challenges that all ask for sustainable and culturally accepted solutions.