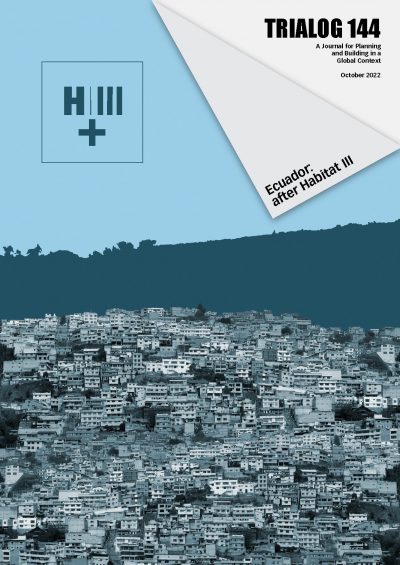 When Quito hosted the Habitat III Conference in 2016, Ecuador committed to being at the forefront of the New Urban Agenda’s implementation and to addressing the severe challenges of rapid urbanisation.

Historically, Ecuador’s urban development has been paired with highly unsustainable expansion and flawed processes. Statutory planning models, characterised by unsuitable policies, have never properly addressed the dynamic developments on the ground and have led to increasing inequality, unmet demands for affordable housing, and excessive land consumption through sprawl, all of which poses severe threats to natural resources and the environment, and consequently elevates vulnerabilities to disasters.

This issue of Trialog critically assesses the outcomes and impacts of the conference in that country. It describes Ecuador’s present conditions and dynamic developments, particularly in reference to transitions and new visions in urban areas, six years after Habitat III. It looks at the discourse on new urban approaches while analysing the challenges and setbacks, which have not been sufficiently addressed by the relevant stakeholders involved.

The orientation and performance of these key stakeholders in urban development are discussed by Rosa Elena Donoso and Andrea Carrión while looking into the participatory process within the governance arrangements for the NUA in Ecuador. Civil Society – and the non-profit organisations, private sector and academia within it – has not only contributed and supported new urban policies, but has also actively engaged in the politics that will frame the implementation of Ecuador’s Sustainable Habitat Agenda (AHSE) 2036.

Noor Ul Huda and Tannya Pico assess improvements made in higher education after the academia went through substantial reform in 2008 and, since 2016, has aligned new programmes to the New Urban Agenda (NUA) and the Agenda 2030. However, the universities remain distant from the requirements of the public administration and still contribute little to sustainable urban development. The authors discuss the challenges for offering more targeted education and research, and for improving academia’s own capacity development.

Bernardo Rosero provides insights into the conditions of Ecuador’s outstanding urban heritage. The nation had committed to the implementation of the SDGs before the NUA was approved in Quito, and has applied them to its spatial planning policies – specifically, through the Organic Law of Territorial Planning, Land Use and Management (LOOTUGS). Presenting the specifics of the UNESCO-protected historic centre of Quito, the author depicts how urban management tools could address minusvalía (‚less value‘) in the heritage designation of propertiesin the historic areas.

Another analysis of the potentials of the LOOTUGS is provided by Cristina Gomezjurado, Paco Salazar and Daniel Vizuete-Sandoval when discussing the milestones for urban development in 2016: the signing of the New Urban Agenda, the subsequent approval of the aforementioned Territorial Planning Law – and the earthquake that heavily impacted Ecuadorian coastal cities. The authors co-relate these events with the processes of the creation and application of land-use value-capture instruments in Quito and the subsequent results during two administrations periods between 2009 and 2019.

Myriam Jácome takes a closer look at the risk preparedness of the country’s urban areas. With the case of the municipality of Latacunga, she reflects on the current urban planning practice and new approaches in a context of high exposures to potential disasters.

Elisa Puga observes how Quito continues to struggle with meeting the mobility needs of its citizens. Despite that the city subscribed to promoting sustainable mobility during Habitat III, challenges and controversies, political issues, and irregularities in the contractual processes and execution have stained important projects. The author argues that only sustained, integrated, and depoliticised practises can generate effective responses in a city where mobility conditions perpetuate inequalities.

In the closing opinion piece, the editors Alexander Jachnow, Myriam Jacome and Tannya Pico reflect with the authors of this issue about the opportunities that the UN Conference provided to Ecuador. With a critical summary of what has happened ‚after Quito‘, this final discussion tries to shed light on the reasons why the postulates for a different urban development created by the NUA could not fulfil their expectations.