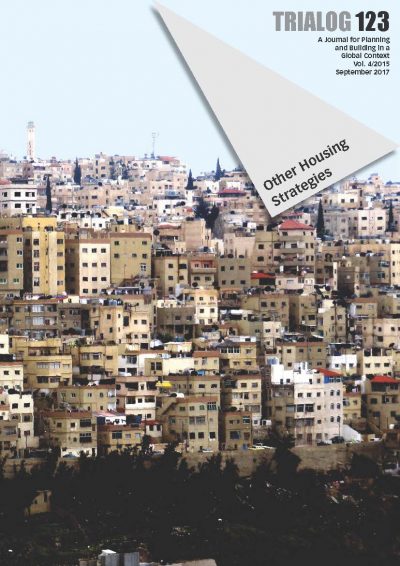 In spite of all the technological and economic progress that the world has experienced over the last 50 years, the number of homeless and precariously housed has increased worldwide. A major reason is, of course, the generalisation of neoliberal policies spread through globalisation.
But in spite of this general trend, which is bound to continue for years if not decades to come, a large variety of formal, informal or semi-formal housing strategies have been, and can be, developed that offer better and more easily accessible housing solutions than those current political systems tend to come up with. The problem of formal state housing solutions seems to be more a lack of imagination than fundamental opposition to new approaches. After all, decent housing conditions have always been considered a stability factor against political turnover and should therefore be supported by open-minded state representatives (who are still a minority, though).

The very first number of TRIALOG, published in 1983, attempted a fair assessment of conventional housing policies for the poor in the Global South. Most of the critical statements expressed in the papers of that issue still hold true today, although contemporary ecological and climate
change concerns were obviously not a topic at that time. Since then, positive mass-housing policies have certainly declined rather than increased. On the road, alternative solutions in form of self-built housing solutions have periodically been rediscovered as options, and were discussed
in TRIALOG 18 (1988), but they seem simply to be too time-consuming in a fully “tailored” working environment. In this current issue of TRIALOG, we focus on the individual appropriation of state-built housing, on the effects of the penetration of the private sector into low-income housing solutions, and on user-driven adaptation of state housing or other neglected structures.

The first paper, written by Janice Perlman, the author of the legendary Book “The Myth of Marginality”, tracks back the failures of public sector interventions (which she characterises as “the helping hand strikes again”) and their effect in the same informal neighbourhoods of Rio de Janeiro in Brazil that she studied 50 years ago. Considering that very soon one in three people on the planet will live in informal areas, we should better decide to make positive use of the knowledge and talent of the billions of people living on it than relying on the state to take the lead.

Monika Grubbauer analyses the recent Mexican experience in which the state apparently restricts itself to the role of a facilitator, while it relies less on the individual settler than it does promote corporate market intrusion in both the field of informal settlement upgrading as well as the provision of large-scale workers’ housing supply. Interestingly enough, the disregard of popular demand and preferences has simultaneously produced the phenomenon of large-scale vacancy rates, neatly demonstrating an incompatibility between housing need and market supply in the low-income sector. The distinction between “formal” and “informal” has been commonly linked to a legal interpretation. The
stricter the legislation, the more impractical is the enforcement of formal constructions. Vietnam, as demonstrated by Hoai Anh Tran and Yip Ngai Ming, is a highly interesting example of a complex but functional practice of resolving the discrepancy between legal norms and widespread illegal practice by means of political negotiation and community consensus.

Whereas the Vietnam paper refers to the impact of legalisation on informal constructions, Elettra Griesi reports on informal adaptation of formally produced mass housing in Cuba. Her empirical study refers to a well-intended provision of standard walk-up apartment blocks to be occupied by a rural population traditionally housed in one-storey detached cottages. The paper highlights the cultural incompatibility between both models and focuses on human and cultural values about which the local professional wisdom appears to be completely ignorant.

A partly similar process of architectural appropriation can be observed in two – once avant-gardist – social housing estates in Peru from the 1950s and 1960s, commonly known as UVs and PREVI. The author, Patricia Caldas Torres, argues that the original high architectural quality, whether anticipating later modifications by the users or not, facilitated spatial adaptation and appropriation – a very positive experience in comparison with the preceding Cuban case study. Apart from the original architectural quality, apparently the limited control exerted by a weaker state also facilitated the extent of user appropriation in Peru.

No form of state control seems to limit the appropriation of space in informal settlements around Maputo, Mozambique, as revealed by Joana da Cunha Forte. However, though less abrupt than in the Cuban case above, we observe a gradual transformation from rural to urban housing patterns. In this case, an increasing scarcity of space dictates a continuous change from outdoor to indoor living patterns. Similar to in a chicken farm, overpopulation nurtures social conflict. So far, multi-level living has not yet arrived – a potential alleviation, in respect of living space, but probably an additional cultural factor of stress.

A very special case of informal settlements, occasionally even with a rare variety of multi-storey housing, are the historical cemeteries in Cairo, Egypt, described by Zeina Elcheikh. Opportunities for adaptation of the living environment are limited; more realistic would be to refer to adapting lifestyle to the setting. The costs of living in the “City of the Dead” are mostly social which the individual residents must weight against material benefits like free lodging and a central and quiet location that provide a certain compensation.