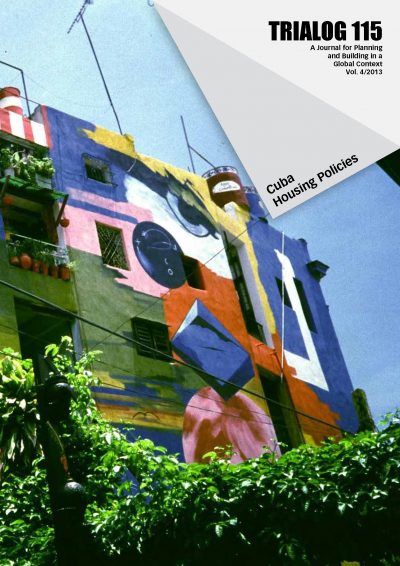 The background to this special country volume of TRIALOG is rooted in a request by the Cuban Government to UN-HABITAT to support the preparation of a new Housing Law in 2013 – and connected to that, the publication of a special country volume on Cuba being part of the UN-HABITAT Housing Profile series. Kosta Mathéy –co-founder and TRIALOG member since 1983, and acknowledgedinternational expert on Housing provision in Cuba 1 – was invitedto compile and edit this publication, and to share his observationswith the Cuban counterpart in view of the forthcoming HousingLaw. In gathering the necessary data, he was supported by a teamof national experts 2, who each contributed their knowledge in thecompilation of individual chapters for the policy report, which wassubmitted to the national counterpart in 2014.

In the same year, UNHABITAT published a 70-page ‘executive’ version of the Housing Profile 3, based on a draft version by Kosta Mathéy. But the initial request – to advise the Cuban Government in the formulation of a new National Housing Law – had become obsolete after the National Housing Institute (INV) had been dissolved, and its former staff – and their functions – transferred to two different state institutions: The Ministry of Construction (MICONS) and the Physical Planning Institute (IPF). A digital version of the full research report, 4 comprising over 500 pages, was informally distributed among relevant state, academic and professional key addressees within Cuba, but never formally published for lack of funds necessary to cover the cost of copy editing and printing. Nevertheless, there is a general agreement that, even today, this work including its 15 comprehensive sector reports, represents a key document to understand the Cuban Housing system.

Methodologically different from the many planning workshops organized in the various provinces, our starting question was not ‘what needs to be done?’ – which invariably provokes actionist ad-hoc recipes. Adopting a more ‘scientific’ approach, we started by exploring the bottlenecks in the current national system of housing provision and management. Following the identification of these PROBLEMS – which are visible on the surface – we then went forward analysing their roots. Finally, for each of the identified CAUSES, one or several possible REMEDIES were evaluated and proposed as policy options. In medicine and other sciences this LOGICAL FRAMEWORK is well established – but, strangely enough, only rarely applied in politics.

Apart from the documentary part of the work, the RESULTS of this analytical research culminated in the identification of 171 key problems, which can be explained as a consequence of a list of 406 causes (or ‘roots’). For each of the identified causes, different alternative or complementary ‘cures’ have been described: altogether not less than 518 remedies! This detailed analysis offers an ample list of possible policy options to improve the acknowledged housing crisis in Cuba.

Considering such a large number of policy options, the strategic question is less a question of ‘what to do?’ – but rather ‘where to start first?’ The good news for the policy makers is the observation, that most of the measure proposed in the Housing Profile are not capital intensive – and a large part among them do not require any capital investment at all. However, for having been specifically developed on the basis of the concrete situation in Cuba, most of the described solutions would not be applicable automatically in a different national and economic context. Nevertheless, the underlaying logic and methodology is rather simple and not restricted to the Cuban case.

For publication in TRIALOG, the full research report would be too voluminous, apart from the obstacle of only being available in Spanish language. The short ‘Versión Ejecutiva’, was copy-edited by UN-HABITAT with an official audience in mind, while TRIALOG readers tend to be mostly academics plus some field professionals. Hence, a different version was fully rewritten for TRIALOG in English except for some smaller sections which are translations from the original UNHABITAT manuscript. More importantly, since a considerable number of international research on different aspects of housing in Cuba has been published recently, the relevant new references have been added in this paper.

On my last visit to Cuba, I asked a number of colleagues about any important recent changes in the housing system, which should be considered in the present edition. The uniform reply was that, unfortunately, the originally planned comprehensive overhaul of the housing system has not yet happened, and that the adjustments made in between were of minor importance. However, myself I feel that at least one significant change needs to be pointed out – and this is the new and acknowledged right to sell and buy residential property on the market. This reform is significant since it implies a change of meaning of the ‘home’ from being a basic right into a commodity. Therefore, a separate paper on the recent commodification of housing in Cuba, authored by Aline Miglioli, was added after the main contribution in this volume.

I thank my colleagues in the TRIALOG editorial board for their patience until the finalization of this volume’s manuscript, but also especially to the members of my National Support Team and to Claudio Acioly, my advisor on behalf of UN-HABITAT in the preparation of executive version of the Cuba Housing Profile.