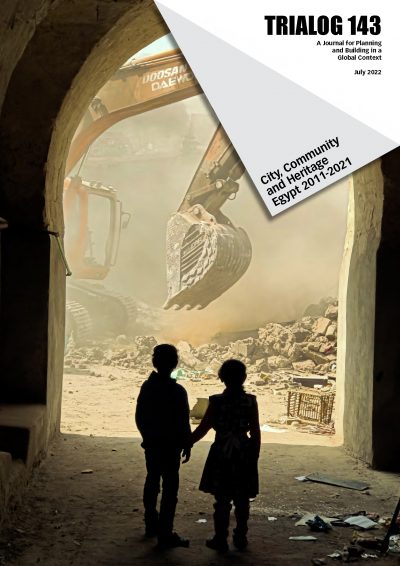 Revolutions and uprisings are turning points in the history of nations that invoke the onset of a new stage different from the former one. Accordingly, each nation takes transitional steps with various tumultuous processes and outcomes towards a ‘better’ visionary future. With the outbreak of the uprising in 2011, Egypt experienced a socio-political paradigm shift that generated new national and local outlooks, invigor­ating a sense of belonging. Since then, the country has experienced a fluctuating series of discursive trajectories that have affected its urban scene. This is exemplified in consecutive Egyptian administrations adapting to a variety of urban changes, issuing new laws, and imple­menting new projects in existing as well as new cities. The general urban scene has not only been influenced physically but has also changed existing, socio-economic community patterns. Consequently, the perspective towards the urban fabric has been dramatically changed. Within all these changes, the Egyptian heritage in particular has been confronted with a variety of transformative challenges, inter alia: neglect, speculation, demolition, and the malpractice of conserva­tion, the last expressed in ‘development and beautification projects’.

It is time to look back to articulate and review the implications of these transformations on Egypt’s urban environment, which is the objective of this issue. The idea for the issue arose during an international, 10- day workshop entitled ‘City, Community, and Heritage’, which was held in various urban locations across Egypt in November 2018 as a result of the cooperation of Kassel University (Department Stadterneuerung und Planungstheorie [Urban Regeneration and Planning Theory]) and Bauhaus-Universität Weimar (Department Denkmalpflege und Bauge­schichte [Heritage Conservation and Architectural History]), along with both universities in Egypt, Alexandria University (Revitalization of His­toric City Districts-RHCD Master Programme) and TU Berlin Campus El- Gouna (Master Programme Urban Development). Three of the work­shop organisers, Hebatalla Abouelfadl, Mirhan Damir, and Mohamed ElGamal, encouraged the participating students to reflect and analyse their observations on the ongoing urban changes, espe­cially in the visited historical areas, from various perspectives, as part of the university seminar outputs. It was later that the encouragement transcended the university premises and expanded into an open call for papers by researchers and practitioners to complement the per­spectives of this issue. This issue is an attempt to comprehend the ex­isting influences based on triangulated linkages between the city and community in relation to heritage aspects. This takes place by looking at ‘City, Community, and Heritage’ in Egypt through three lenses, differ­ent in scale, yet mutually intertwined in their impacts and affectedness.

The first part, Decade(s) of Formal Urban Practices, looks at notions of how a ‘better’ visionary future is actually put into practice in the con­text of Egypt acknowledging macro-political dynamics of the 20th cen­tury, as well as the lessons learned. Hebatullah Ghalib, Yehya Serag and Tamer El-Khorazaty provide an insight into the ambitious and impactful urban planning practices throughout the 20th century, which radiate into the first decade of the 21st century, in their essay ‘Egypt Post Revolution: A Social Spark for Mega-Projects’.

In her essay ‘Alexandria’s Urban Transformation: A Trauma or a Bless­ing’, Hebatalla Abouelfadl focuses on the differing perception of pro­fessionals and non-professionals towards three large-scale develop­ment projects in the city of Alexandria.

The second part, Collective Experiences and Impacts, presents three articles that demonstrate perspectives on how the above-mentioned planning ambitions and policies interact with socio-political paradigm shifts, creating new realities and coping on the local level.

‘The Era of Agoraphobia’, by Dina Elmazzahi and Jihad Abouseif, explores the impacts of post-2011, top-down development approaches on the sense of belonging and physiological (dis)comfort in public ur­ban spaces in Alexandria, resulting in what they argue is agoraphobia.

Nagla Al Khoreiby’s essay ‘The Role of Society in Times of Transition. On Citizenship and Territories of Hope’ discusses the collective socio-spatial impacts caused by the dynamics in planning and policy since the 2011 revolution by adopting the analytical perspective of ‘territorial functioning’.

Florian Murrawi discusses, in his paper ‘Outsets, challenges, and opportunities of civil society in the context of Egypt’s current conser­vation policies’, the role of Egypt’s civil society actors in historic dis­tricts of Greater Cairo, and their relevance and manoeuvring room in making the current Egyptian conservation policy and practices more inclusive.

The third part provides Personal Experiences and Impacts of decade-long urban-development dynamics, with Mohamed ElGamal applying the phronesis of social research to demonstrate his personal experi­ence during the search for an apartment, representing the under-mid­dle/middle social class, in his essay ‘Two Stories on Housing and Infor­mality from Alexandria after 2011’.