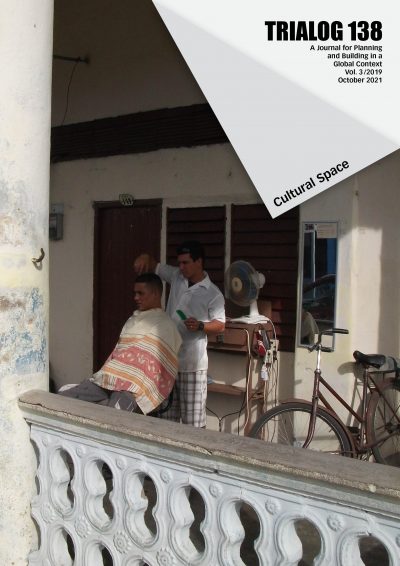 The physical production of space always requires individual and collective action grounded in social values, beliefs and routines that are based on social organisation and structure. Accordingly, physical space provides clues on social organisation as it allows us to learn about the local ideas, meanings of space, social norms and ideologies behind it. The social and cultural codes reproduced in space enable and simplify interaction between actors and, as such, can be understood as a spatial language. Let’s take a look at an example. The Bedouin tent, for instance, represents a family-shared place in their everyday life. Should a male stranger come to visit, the family flexibly zones the tent with a curtain into a separate visitor’s area where women are not allowed to enter until the visitor has left. In a similar way, the same applies to the visitor who, for the length of his stay, is not allowed to enter the private and familial area of the woman. This form of ‘silent interaction’ is based on shared local norms that need no further explanation to be evident and to be considered as part of a shared spatial language.

Accordingly, this edition focuses on the co-production of space that stems from two complementary processes: Firstly, space as produced by political, economical, ideological, and technological factors that solidify in the physical production of the material environment. Secondly, the social construction of space that describes its symbolic experience in how actors fill the built environment with specific meanings, intentions, ambitions, and discourses in accordance to their ideologies, social norms and values. Both processes, the production and construction of space, are always locally grounded and tied to cultural meanings, hence cultural space. Yet ‘culture’ is not a matter of ‘natural attitudes’ or ‘human nature’. Rather, it encloses the totality of values, norms, beliefs, social practises, and institutions that materialise in specific places at specific times and that are continuously subject to change.

In the first paper, Anna Schnieder-Krüger discusses the consequences of government policies for educational institutions in India after 2014. By using the example of a contested space at the JNU campus in New Delhi, she focuses, on one side, on strategies and political decisions aimed at changing the perception of the campus from inclusive to ‘anti-national’ through physical and symbolic interventions. On the other side, she explores how the JNU campus became a symbolic site of resistance through students’ performative space appropriation practises.

Public space appropriation practises are also at the core of Karina Mendonça de Almeida’s paper. Looking at the Kreuzberg district in Berlin (Germany), she analyses the city’s strategies to attract large investments by facilitating the installation of (inter)national tech businesses. As a result, hybrid spaces are produced while gentrification processes are intensified. Based on global networks in virtual space and shared values, a local campaign started in Kreuzberg to re-appropriate public space, offline and online, and to prevent the installation of a Google campus in the neighbourhood.

Moving to Peru, local struggles to contrast the lack of urban planning policies and real-estate speculation in marginal districts of Lima rely on strategies of self-organisation, space occupation and self-building. Using the example of the Nadine Heredia neighbourhood in Lima, Diana Rivas shows how processes of self-building depend not only on community work but also on the solidarity practise of the ‘common pot’ (soup kitchen). Rooted in ancestral Andean traditions, the ‘common pot’ creates and takes place in public spaces, uses shared spatial languages, acts as a social glue, and plays a key role in the process of both informal and formal city formation.

Public space can also become an arena for decolonisation processes in southern planning through local performative practises, as revealed by Rebekka Keuss. Based on her ethnographic work, she illustrates what kind of public spaces are revealed in Lilongwe (Malawi) when they are seen as public urban life being lived in a given context and less guided by largely unsuitable global planning practises. Through the game of Bawo, a mobile board game, more-grounded alternatives on public space planning in Lilongwe are illustrated and addressed, shedding light on what specificities really create and shape these realms.

Collective space production can be deployed as a strategy to contrast poverty and ‘illegal’ migration. Based on shared patterns of space usage, social movements of the Lebou community from Dakar (Senegal) re-appropriate space collectively for self-realisation, transforming residential areas and public facilities into places for economic activities. As part of her PhD, Elettra Griesi examines not only the strategies employed to reach their goals but also how spatial collective action can contribute to reproduce socio-spatial and economic exclusion while generating changes in the social order.

While social movements in Dakar contrast ‘illegal’ migration, diaspora groups living in Italy have a significant influence on space production in the rural municipality of Niaogho (Burkina Faso). Thanks to their remittances, migrants gain symbolic and economic powers that enable them to establish key relations and to finance public infrastructure and home buildings, following planning models based on European concepts. Èric Bayala and Markus Schermer examine ways of interaction between diaspora members and the local community in terms of selecting, planning, implementing, and monitoring administrative infrastructure. Furthermore, they illustrate how household members integrate and adapt the modern infrastructure to their daily life.

An unusual yet interesting contribution to the topic of space co-production is made by the Foundland Collective, a Syrian South African female design duo. As part of the project Groundplan Drawings, people of the Syrian diaspora were asked to depict their post-conflict memories. Through the act of drawing, participants remember the architectural spaces of their homes and visualise the associated memories and emotions. The drawings are meant to encapsulate in detail the effects of the conflict and how an intimate, domestic space is transformed from being the living quarters for extended families to a shelter from bombs and devastation.