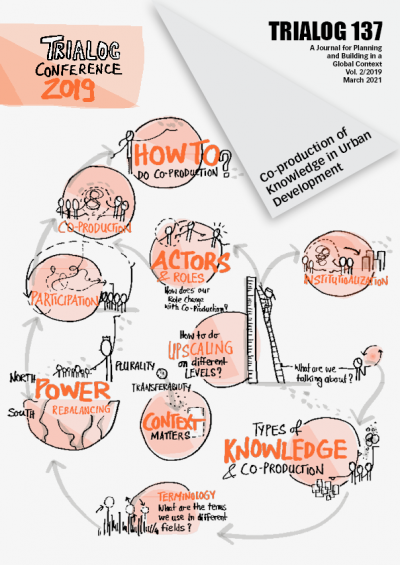 Around the world, but particularly in the Global South, contemporary urbanisation processes have called attention to inclusiveness as one of the primary challenges of urban development. Co-production of knowledge has emerged as a promising mode of governance during such processes as it provides innovative approaches to relationship-building and shared decision-making in practise and research. The term ‘co-production’ covers a broad range of meanings. In the fields of planning theory and development studies, the term relates mostly to the co-production of urban development in terms of infrastructure and services. However, it can also relate to the collaborative production of knowledge within both urban research and urban development processes.

This issue of TRIALOG offers an alternative perspective to the rather widely dominating discourse in urban sustainability that calls for transdisciplinary research and, consequently, co-production of knowledge in order to incorporate the complexity of unstructured problems. This is contrasted by the discourse in development studies that recognises co-production of knowledge as a means of empowerment. Both discourses share the aim of developing innovative and applicable solutions to cope practically with major societal challenges. However, empirical evidence that sheds light on co-production of knowledge in urban development is limited. This issue of TRIALOG is an outcome of the 2019 Trialog Conference in Stuttgart on co-production processes in urban development and research. It showcases empirical evidence from across the globe in an attempt to fill that gap.

The contribution by Roderick Lawrence gives an excellent overview of the different terms used and holds them up against decades of experience within planning discourse. Adding to this contextualisation of terms and approaches, Isabelle Willnauer further elaborates on the planning discourse and investigates co-production from a planning theory perspective with a focus on the potential conflicts that hinder innovation in planning. Based on empirical evidence from a transdisciplinary research project in Germany, Raphael Dietz, Sigrid Busch and Dan Teodorovici highlight the catalytic effect conflicts can have in transdisciplinary processes and call for embracing these conflicts instead of undermining them.

The two subsequent contributions present comparative studies between, respectively, Sweden, the United Kingdom and South Africa, and Chile and Germany, arguing that similar processes can be observed across diverse geo-political spaces. The main focus of the contribution by Warren Smit, David Simon, Elma Durakovic, Mirek Dymitrow, Gareth Haysom, Kerstin Hemström and Jan Riise is on ‘conflicting rationalities’, which is discussed based on the transdisciplinary co-production experiences gathered within the Mistra Urban Futures Network. According to the authors, engaging with the different rationalities in co-production processes is the basis for effective cooperation and just cities.

Paola Alfaro d’Alençon, Carolina Jacob Reyes and Josefa Zavala Aránguiz discuss the diverse contextual factors and underlying rationalities of the concept of co-production against a neo-liberal setting in Chile (and Germany), where a plurality of rationalities is reflected in the skewed power relations and changing roles of the involved actors. The contributions by Johanna Brugman and Andrea Brown reflect on these aspects in, respectively, Vietnam and Uganda, based on empirical evidence from their involvement in the prominent networks Asian Coalition of Housing Rights (Vietnam) and Slum/Shack Dwellers International (Uganda). The contribution by Alexander Jachnow and Gisela Garrido confronts the development dilemma and the implications of co-production of knowledge for sustainable urban development. The authors combine a thorough theoretical discussion with the specific case of Ecuador to call for alternative approaches to sustainable urban development based on comprehensive and co-created urban knowledge.

In her study of two secondary cities in Ghana (Techiman and Sunyani), Nina Gribat exposes some practical limitations of the discourse on co-production of services, especially in cities with limited planning capacities and a low degree of organised civil society. Stephen Ouma Akoth, however, invites us to contemplate the ways ‘cityness’ emerges through an intricate choreography of representation, connections, and the way urban dwellers mobilise their given agency as they struggle against alienation. The case of Mashimoni people’s settlement in Nairobi, Kenya, demonstrates practices of co-production through the application and appropriation of the STDM (Social Tenure Domain Model) by the urban poor.