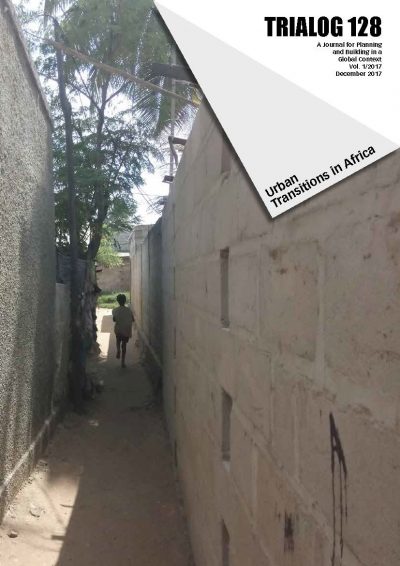 African cities are experiencing rapid population growth and spatial expansion. This is paired with increasing economic and social inequalities of
the urban population, trends that can be illustrated by the fact that land consumption is increasing per capita, that the cities are as expensive as
expansive, and that urban growth is not sufficiently accompanied by positive impacts on social and economic development.

Urban transition is generally explained with the complexity of social and economic transitions, population growth, and migration. However, these
are only the factors that make urban transition necessary and irreversible. Access to land, housing, and urban services are the key variables that deepen the divide between emerging middle classes and the urban poor. For a sound explanatory framework of urbanisation processes, the agents who are active in these processes must be looked at in order to explain “how” urban transitions are managed, steered, and/or (self-) organised. Emerging informal land markets, precarious settlements, and scarcity of urban services are prominent examples of the impacts of poorly managed urban growth with long-term consequences.

Spatial and institutional transitions and Africa’s urban transformation are the focus of this volume of TRIALOG. Our authors address power relations and imbalances between different actors, in/formal land-management processes, complex land markets, and spatial reconfigurations, among other aspects of these transition processes. The first nine articles of this TRIALOG volume are linked to papers presented during the first Mozambique Urban Research Forum, or Fórum Urbano Nacional de Pesquisa (FUN-P). The forum was envisioned and implemented by the Institute for Housing and Urban Development Studies (IHS), Rotterdam, with the support of the Universidade Eduardo Mondlane (UEM), pursuing the objective to foster research on the ongoing urbanisation in Mozambique and Africa. The international event, held in Maputo in June 2016, brought together researchers and professionals from 11 different countries: Mozambique, Brazil, Ireland, Italy, Nigeria, Portugal, Spain, the United Kingdom, Uganda, Zambia and Zimbabwe. Eighteen researchers presented their papers in four panels, along with urban experts and practitioners.

FUN-P is an outcome of the research project Urban Expansion and Compactness Debate in the Context of Mozambique. This project was executed by the IHS as part of the Future Cities Africa (FCA) initiative, funded by the UK Department for International Development (DFID), and implemented by the Cities Alliance. The IHS conducted in-depth research by collecting and analysing data on urban land expansion in secondary cities in Mozambique. The purpose of this research project was to fill crucial theoretical and corroborative gaps related to the comparative merits of planned expansion and compactness by collecting and analysing data on cities and urban land expansion, testing the relevant theories/models, and feeding the results into the current academic and policy debates at national and international levels.

The contributions in this volume of TRIALOG shed light on the urban transitions in African countries resulting from the inherent effects of rapid urbanisation in terms of governance, spatial transformations, and socioeconomic impacts. Alexander Jachnow analyses the benefits of different urban actors derived from the dysfunctionality of land-provision systems by assessing complex urban land markets in Mozambique, stressing the negative consequences of these short-term benefits. Carolina Lunetta and Els Keunen assess the role of local governments and land-market transformations influencing the process of urban expansion and leading to sprawl and the commodification of land in Nampula, Mozambique. Anna Mazzolini and Daniel Draper revise land management and governance in Mozambique through the lenses of “inverse-planning” initiatives at the city outskirts of Maputo, which represent an opportunity to reshape the social contract between the citizens and local authorities. Ogenis Brilhante debates two opposing paradigms related to city sustainability “making room for future city expansion” and the “compact city”, identifying and measuring the sprawl and compact characteristics of the expansion process of the city of Nampula, Mozambique. Paul Jenkins presents the relevance of new forms of urbanism by “non-formal” initiatives of residents in Mozambique as a manner to guide and support urban development with significant qualitative impact. Victor U. Onyebueke and Raphael I. Ndukwu explore the impacts of recent neo-customary practices of rural communities in transforming, customary land-tenure systems in peri-urban areas, which are accelerating urban sprawl in the Enugu metropolitan area of Nigeria. Eléusio Viegas Filipe and Simon Norfolk expose the socio-economic transformation of peri-urban areas in Belo Horizonte, Mozambique, from subsistence agriculture to high-value residential plots, with the peasantry being dispossessed from their land by urban elite. Eddy Chikuta, Wilma S. Nchito, Emma Wragg and Gilbert Siame assess the nature and implications of settlement upgrading through the lens of gentrification in Kalingalinga, one of the fast-developing informal settlements in the city of Lusaka, Zambia. Kerry Selvester and Caroline Wood expose the tangible and intangible barriers that geographically confine young women to the bairros in Maputo, Mozambique, and emphasise the need for interventions that address these barriers in order to unlock the opportunities that cities present. Finally, referring to urban development pattern in the North of the continent, Hans Harms analyses the formation processes of two different types of informal settlements in the Greater Cairo area and discusses policies for their improvement. This last example shows how extremely high densities and compactness achieved through such informal processes lead to another set of challenges in the process of urban transition.