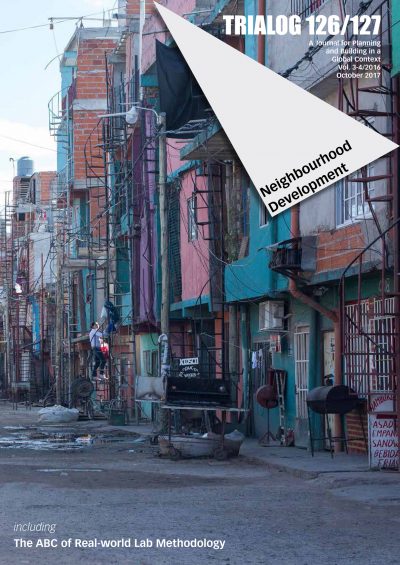 „Neighbourhood Development in the Global South“ was the topic of a conference held by TRIALOG e.V., the Arbeitskreis Stadterneuerung an
deutschsprachigen Hochschulen [„Working Group on Urban Regeneration at German-speaking Institutes of Higher Learning“], and the Department of Urban Regeneration and Planning at University of Kassel, which took place in June 2016. Inspired by the Call for Papers published in TRIALOG 118/119, presenters explored the urban regeneration strategies of state actors as well as the contributions of community organisations to neighbourhood development. In seven sessions and twenty presentations, participants discussed frameworks and paradigms of neighbourhood development, the different requirements for the upgrading of informal settlements and inner-city quarters, matters of infrastructure and resilience, as well as participation methods and evaluation criteria. In this context, international development goals were recognised as important points of reference. While these goals are supposed to further the fulfilment of human rights, it was noted that they also tend to be abused for legitimising forced renewals. Thus, discussions also returned to the debate around „the right to the city“, which substantiates people’s claims for access to basic services and the co-production of urban environments. TRIALOG subsequently invited some of the authors who spoke at the conference to elaborate on their research findings and arguments in scientific papers, and to submit their papers to an anonymous peer review. More-extensive empirical and theoretical articles will be published in the forthcoming Jahrbuch Stadterneuerung, the urban regeneration yearbook published by our co-operation partners.

Based on a study conducted in a suburb of San José (Costa Rica), Castillo Ulloa calls for an alternative politics of neighbourhood development and attributes a catalytic role to public space for citizen’s self-empowerment. Public space is also afforded a central role in the highly praised urban regeneration programmes of Rio de Janeiro and Medellín. Restrepo Rico lets it rain on their parade: While these programmes have produced remarkable innovations and significantly improved the infrastructure in poor neighbourhoods, the lack of real participation by the people casts doubt upon the sustainability of the results. Meanwhile, the focus of urban planning in Rio has shifted from incremental neighbourhood improvement to large-scale urban development driven by mega events. Paris, Guasch Antúnez, Bertame and Romero analyse the fight of the inhabitants of Vila Autodrómo, who defended their place in the city against construction works for the Olympic Games with the help of planning from below. Villa 31 in Buenos Aires had likewise been threatened with destruction for years, but as Naue reports, it is now undergoing a process of preservation and gradual improvement – nevertheless, inhabitants are still faced with unresolved questions of tenure security. The cover of this issue is of Villa 31. The slogans on the facades call for the „immediate authorisation of roads and sewerage“ and celebrate „People’s Power“. It seems as if neighbourhood development can only be attained through social organisation.

Based on case studies from Jakarta (Indonesia) and Soc Trang (Viet Nam), Putri makes an argument for the neighbourhood as the preferred scale of investment into water infrastructure. Water supply, wastewater treatment, and storm-water management could all benefit from more-decentralised planning. This article is followed by two contributions developing criteria for the evaluation of resettlements. Based on a livelihood approach, Obermayr and Sandholz arrive at a rather positive assessment of a resettlement in Surakarta (Indonesia), which was prepared with significant input from the affected residents. Thonke reviews resettlement processes in Cairo based on criteria developed by the OHCHR and IASC, and suggests concrete measures for overcoming the deficits. ElGamal analyses the institutional context within which these measures would have to be implemented. While it was an important decision by the Egyptian state to focus on unsafe areas, to date its institutions have been too short-lived to develop a sustainable practice of urban regeneration that is able to learn from its own mistakes. In Algeria, the government wants to eliminate and replace all forms of precarious housing. In her interim conclusion, Chabou-Othmani points out negative consequences of the resettlement policy while also mentioning merits of the national housing programme.

This double issue is complemented and accompanied by an article on sustainable neighbourhood development, participation and action research
from Germany. It is a catalogue of key terms of real-world lab methodology developed by the research team „District Future“ of the Institute for Technology Assessment and Systems Analysis (ITAS) of Karlsruhe. Whether the definitions, goals and methods described by our colleagues could also be productive on the southern half of the globe could be explored in a future issue of this journal.