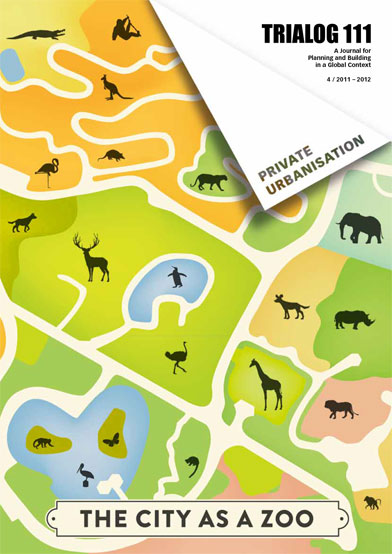 Nowadays privatisation is often seen as a panacea for the problems of urban modernisation and development. Whether because of dissatisfaction with public services or because of shifts in politics or the economy, many cities turn to the private sector to aid in their development, and many private initiatives take the reins when the government weak. In particular in the developing world, the context of political instability, environmental risk, and socioeconomic divide creates distinct spaces for the privatisation of services and public goods by new actors from the corporate sector and distinct civil society groups. The situation also produces a fertile ground for partnerships between governments and the private sector, so-called “Private Public Partnerships” or PPPs.

The articles in this issue of TRIALOG assert that partnerships between the public and private sectors have entered mainstream urban development practice, and that many variations of this are evolving to respond to different conditions and needs. The articles also reveal how the final results of such private modes of urban production and partnerships can be both positive and negative, complex, and constantly evolving. Each of the articles in this issue addresses questions of how privatisation impacts socio-spatial and urban development in the Global South. The focus ranges from the effects of the global metropolitan mainstream on younger generations, across the impact of PPPs on housing, slum redevelopment and infrastructure provision, and on to the strategies and responses of self-organised populations.

An overall conclusion is that albeit the process of private urbanisation often appears as the only viable mode of development, and while it engenders a high degree of innovation, the emerging space is not a city for all. In a system of opportunistic enclaves, public space is neglected: the city as a zoo (see the title page). Most often the negative effects are largest for the poor and excluded, who are either overlooked during the process of redevelopment or are seen simply as an obstacle to overcome in the quest towards a more attractive city. Nonetheless, the articles also reveal that the government remains a crucial element in the process and that there is a strong need to integrate social and environmental agendas into the modes of private urban development.

Spaces of global consumption have not only a strong impact on the affluent but also on the poor. Petra Kuppinger’s article examines the relationship between global and local cultures in Cairo (Egypt) and, specifically, how younger generations from poor communities are navigating global spaces of exclusivity in Cairo, whether through technology, consumer goods, social practices, or fashion, and how this new consumer culture effects their own communities and neighbourhoods.

As privatisation strategies become popular, governments also seek to employ these tactics to eradicate slums. Since the Indian government supplements their efforts of moving towards slum-free cities with private investments and through Public Private Partnerships, Banashree Banerjee looks at important lessons learned. The schemes and initiatives analysed reveal the underlying policies and practices that continue to have a direct influence on creating an exclusive city.

The cooperation with PPPs in urban development has become an important strategy for many governments. Staying in India, Kiran Sandhu provides an overview of the country’s attempt to modernise its malfunctioning infrastructure through PPPs. Her article reveals the enabling environment the Indian government has created, and also includes a look at PPP trends in infrastructure development as well as future challenges for all players involved.

The void of weak governance is often filled by bottom-up initiatives that privatise their urban space. For example, some communities in Africa are reacting in many creative ways to the lack of adequate public safety and security provision. Cecilia Andersson and Claude Meutchehe Ngomsi take a closer look at this, providing insight into the effectiveness of these practices and their ability to promote human rights and sustainable urbanisation.

Some private developers do attempt to reach the lower-income segments. Florian Steinberg takes a look at the dimensions of privately driven housing in Manila in the Philippines. He finds that the developers today attract a varying degree of socio-economic classes. However, many issues remain to be addressed in order for the private sector to more successfully reach out to lower-income families and the urban poor.

Neoliberalism is far from being outdated. Peter Gotsch provides a theoretical foundation for the theme of this journal by elaborating on the concept of neoliberalism in relation to private urbanisation. He maintains that the neoliberal mode today is characterised by combination of a distinct rational management, new technologies, and the irrational behaviour of the stakeholders in the process. Private urbanisation with a neoliberal mindset appears to have a profound impact on urbanisation processes in the Global South, e.g. by reinforcing prevailing trends of exclusion, fragmentation and segregation. Nonetheless, much remains to be done to unravel the distinct modes of neoliberal production of spaces in the peripheries.