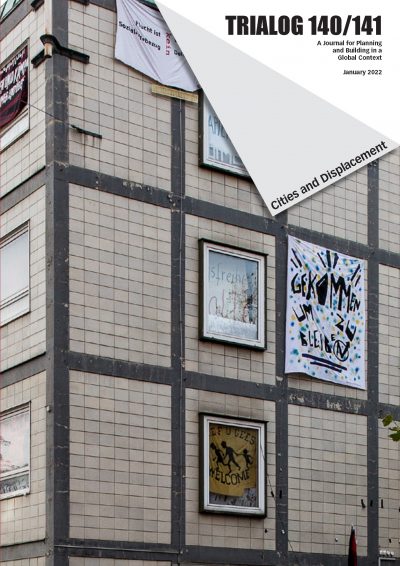 Cities are at the forefront of responding to forced migration and do so in highly varied ways. Only one third of the world’s more than 20 million refugees presently live in camps; the majority settle in urban areas and peri-urban settlements, largely in developing regions in the Global South. An even larger amount of internally displaced people live in cities. Due to a universal trend towards protracted displacement, cities are becoming increasingly important spaces of integration. This is also recognised at the level of global policies. For example, the New Urban Agenda (2016) promulgated at the Habitat III Conference stressed the responsibility of cities to promoting the rights of migrants and refugees, and the UN’s Global Compact of Refugees (2018) called for ‘out-of-camp’ solutions to forced migration. While the importance of cities and urban areas for people who seek protection, means of livelihood and passage has been highlighted for some time, many questions remain unanswered. This special issue enquires into the degree to which policies at global, national and local level acknowledge the urbanisation of displacement, as well as into the interdependencies between different actors and levels of governance. Moreover, strategies and motivations of local urban stakeholders in a multi-level governance context are of interest. This issue further asks how climate and environmental stress, inter- and intra-state conflict, and digitisation influence people’s movement decisions, trajectories, and their experiences in urban arrival areas. The main focus of this special issue is cities and urbanising areas – including camps – in the Global South. This, however, does not imply that we ignore refugee movements in the Global North. After all, TRIALOG is published in Germany, a country in which the domestic policy discourse of recent years has been heavily shaped by the massive influx of refugees in 2015. Thus, three articles in this issue relate to the German scene.

In the first article of this issue of TRIALOG, Eva Dick uses the case of Kalobeyei settlement in the north of Kenya to disentangle how stakeholders of different levels came to embrace local integration as a ‘novel’ approach to refugee management. From the national and regional governments‘ perspective, security interests and a rising gap in humanitarian funding were key factors. For the local government it was about promoting economic development.

In contrast to the common alarmist scenarios of millions of refugees that could soon migrate to Europe, Benjamin Schraven gives an overview of recent research on the climate-migration nexus that emphasises the complexity of the interplay between ecology and mobility. The conclusion drawn is that climate change is more likely to lead to more internal and intraregional migration and forced displacement in the Global South. Urban areas play an essential role in that regard, both as actors and as hotspots of mobility and climate change.

The third article of this issue juxtaposes three interviews conducted at the local level in different parts of the world. Chairman Hamidul Hoque Chowdhury from Cox’s Bazar in Bangladesh, Ullrich Sierau, the former Lord Mayor of the City of Dortmund in Germany, and Patrick Lokewan Nabwel, a GIZ expert posted to Kakuma in Northern Kenya, share first-hand experiences in dealing with the integration of large refugee flows within short and longer periods.

Einhard Schmidt-Kallert’s reportage recounts the unlikely story of the squatters of the house at Obere Maschstraße 10 in the city centre of Göttingen. What had started as an emergency project to assist and empower refugees gradually took shape as a housing project, though with special features: autonomous, multi-generational and multi-cultural.

The article by Hasan Sinemillioglu, Furat Kuti and Salah Hhadeeda depicts the situation and perspectives of the Êzîdî [Yazidis] in Iraq, most of whom are currently living in refugee camps in the Duhok region in Northern Iraq, following the exodus from the Sinjar region in August 2014. The article is mainly composed of authentic voices from the Êzîdî themselves, leaving a rather gloomy outlook towards their future.

Salam Alhaj investigates differences in work and education for Syrian refugees in Jordan between the Zaatari camp and the city of Amman.The author discusses the effect of residing in the camp on labour participation, engagement in formal work and having work permits, and the variations between Zaatari and Amman.

Ayham Dalal and Philipp Misselwitz’s article draws the attention to the role of shelter and how it is appropriated by refugees in their daily life. The authors compiled and interpreted architectural and ethnographic data from two camps: Zaatari in Jordan, and Tempohomes in Germany. The authors conclude that no matter how well designed the shelters are, they will always be appropriated for the purpose of dwelling.

The article by M. Suresh Babu sheds light on the vulnerabilities of migrants, especially due to the COVID-19 pandemic. His study is based on interviews with migrant workers employed in Chennai in Southern India. According to M. Suresh Babu’s findings, key challenges all migrant workers are faced with, such as lack of social security and poor access to basic amenities, have been aggravated by the impact of the pandemic.

Point of departure for Charles Martin-Shields’ article is the transportation disadvantages faced by many refugees. Drawing on fieldwork in Kuala Lumpur, in his article he evaluates the potential of ride sharing for making refugees’ daily lives easier.

Kathrin Golda-Pongratz’s essay is based on long-term research in self-built neighbourhoods on the urban fringes of the Peruvian capital Lima and describes the impact of the COVID-19 pandemic on the population working in the informal sector. The author posits that displacement and uprooting have become a double condition for migrants who had built their homes decades ago but were forced to return to their places of rural origin during the pandemic.